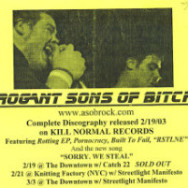 The Arrogant Sons of Bitches Have Reason to be Cocky

Northampton, MA – Big D and the Kids Table, a punk-ska band from Boston, Mass., played an excellent set last weekend for their “Fluent in Stroll Tour” at Pearl Street Nightclub in Northampton.

Big D is known for playing the Pearl Street club often and they gave the crowd what they wanted. The band began their set with a lot of their new songs to promote their latest release, Fluent in Stroll, and also played some of their classics.

I have seen them play many times, and this was another amazing show. It was one of the best performances of them that I’ve seen.