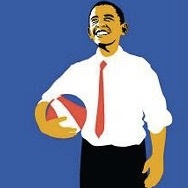 10:15 pm
This is what I know so far. Question 1 was NOT passed (holler), question 2 WAS passed (HOLLER) and question 3 was passed (yay!). Not sure if these are projections or what.

I also know (based on projections) that Obama took Pennsylvania and Ohio which means he basically has this shit on lock.

I’m sitting in my friends’ apartment watching the coverage. We are all drinking and hanging. I am SQUEALING inside. AJHGALJHGA. Just had to call my mom.

This is AMAZING. The first prez election I’ve been able to vote in and it is the most historical election ever!!!

We have been switching back and forth from CNN to MSNBC to FOX News. So CNN is like, “Obama is projected to win here, here and here,” and MSNBC is like “BOOO YAHHHH! OBAMA IS TAKIN’ IT AND MCCAIN HAS NO CHANCE!” and FOX is like, “Sooo…*looks around* annnywayy…”

Comedy Central is on now. I feel this crazy buzz of excitement and disbelief spreading across the country. I am actually proud to be American in this moment.

OBAMA IS PROJECTED AS THE WINNER OF THE UNITED STATES OF AMERICA.

PEOPLE ON-CAMPUS ARE SCREAMING, RUNNING AROUND OUTSIDE.

Between 11:05-11:20
A bunch of us head outside armed with cameras and a notepad (I had the notepad). Groups of students were walking around and most of them heading to the Father Dean Dining Commons for Pancakes with the President! You could tell that students just wanted to be outside sharing in the vibe. The campus really did feel alive. We all gave each other high fives. (Rhymes mcgee over here. But seriously, we did.)

I see McCain people hugging, chatting. Me and my roomie (and Buntology photog) are smoking a victory bowl! Sorry but it’s true. We are. We must.

“Barack Obama will become the next President of the United States,” says this dude on the news.
“People will always remember where they were the moment they first heard…”

11:40 PM
Christina and I are still watching CNN. Obama won by a LANDSLIDE. I feel so weird inside. It’s like I’m finally part of something historical and awesome. This is the first time I’ve ever felt truly connected to America and iiii like it!

12:00 PM
Obama is speaking now. He sounds great, but I can’t help being jaded about the fact that this speech was probably written weeks ago. Barack really tugs my heart strings when he says he misses his family tonight.

I’m trying to see through Obama’s presidential facade and figure out what he is actually thinking.

His speech was good. I wasn’t really moved by it, Christina says she thought it was dope. Obama did seem to get emotional toward the end.

Joe Biden is onstage now, I wonder what he is thinking.

Michelle Obama and the wife of Joe Biden come out. They are pumped. Michelle walks over to Barack and hugs him and she said something to him that I couldn’t make out. She seemed like she was consoling him almost. This must be such an intense and emotional time for Obama. Take a nap, baby boo.

Answer Me These Questions Three

The presidential election will be held on Tuesday, November 4. Whoever is elected will hopefully dedicate themselves to the task of running the country. Whatever their approach (don’t get me wrong, hearing John McCain talk about the “surge” and honor and victory in Iraq gives me flashbacks to the American Nightmare in Vietnam), I’m hoping that the new president will have more character and intelligence then what I’ve seen for the last eight years. Having somebody–having anybody–at the controls might slow this country’s swirl down the drain.