For the past several weeks I have been getting progressively sicker. It started off as just a sore throat and cold, and then turned into fatigue, headaches and swollen glands (I know that swollen gland game far too well). Needless to say, it was time for some blood tests. With all this swine flu stuff you can never be too careful.

This morning I got some blood drawn. The nurse told me it was probably just allergies. I have never suffered from allergies before, but hey, anything is possible. A couple of hours later I get a call with my results. Positive for Mononucleosis!

I haven’t written in a while. I haven’t been doing much of anything in a while. It isn’t because I can’t find a job, or have no friends..It is all because of a little website called, ISketch.com.

About a week ago my friend (and Buntology writer) William Cimino introduced me to this website. It is basically Pictionary online. There are a whole bunch of rooms to join, which hold as many as 10 people at a time. The object is to earn the most points by correctly guessing other people’s drawings, and the player doing the actual drawing rotates throughout the game. I am a really bad “paint” user, and that is the ISketch’s basic setup for drawing your word. Either way, this game has taken over my life for a good 2-3 hours a day.

UPDATE: JON AND KATE PLUS 8 MAKE IT OFFICIAL

I remember Jon and Kate plus 8 when it first started. In the beginning they seemed so much more happy and normal, despite having so many kids in the family. It makes me depressed seeing all these stories and tabloids [like this one? – ange] coming out about the couple. I know Kate always seems a little bossy and crazy, but don’t you have to be a little controlling and nuts when you have so many kiddies running around? 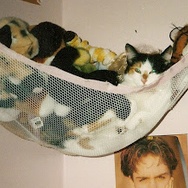 Ode to a Calico

Your hair is everywhere

But usually on my bed

The place you came to cuddle

And liked to sleep on top my head 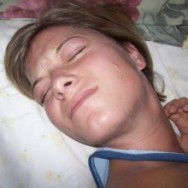 Just letting you know that Glenda has made her way out! Glenda the Gland has finally been killed off by a whole bunch of antibiotics. It took ten whole days but, I think she is gone for good. Can’t say that I will miss her but we had some good times together.

Here at Buntology I think that it is important to keep all readers up to date on not only current events but also the current health conditions of each bunt member.

On Thursday night mom wanted to go out to eat. She was looking for a place that would be inexpensive and somewhere that wasn’t too far from the house.